So far, it's all White Collar.  It's mostly PG, since I don't write slash (because I think I'd be really, really bad at it); nor do I do excessive violence.  At least, I don't THINK it's excessive, Neal might disagree.

Plus, there are two lines I don't expect to ever cross in the White Collar world (which are better described here).  I write my own characters for that kind of treatment.  :)

If I don't say it enough, thanks so very much for reading.

The Effects of Certain Experimental Treatments on Short, Bald Men
Mozzie's attempts at a treatment for a very rare disease he's probably never going to get go awry.  Neal deals.  A fill for my Round 5 h/c bingo, surprise sex swap.  There really isn;'t much actual hurt, because, well, there just isn't.  Neal's nerves are pretty shot.


Twenty-five Days
A post-5.13 fic about Neal's kidnapping.  Also a fill for the Round 5 h/c bingo, Wild Card square ("kidnapping).

Speaking of that bingo card...
Maybe this will be the year I actually write five in some kind of line or something.

Broken Ice
A fill to answer the question, "What if Jones arrived too late when the Russian thug slammed Neal's head against the wall," during 5.06, Ice Breaker.
2013

Nothing Special
A story about childhood memories, deviled ham, and home cooking.  Written for the "comfort food or item" square on my h/c bingo card, and submitted for Caffrey-Burke Day.  Yes, the beginning is completely different than the S5 premier, but it's all fiction anyway.


Down By The River
Everyone always says you can drown in just a few inches of water, but, really?  A fill for the "drowning" square on my h/c bingo card.

The title comes from an old Neil Young song, but that's because I couldn't think of anything else.  No one gets shot.


Wonder Why We Ever Go Home
June has a rough night; Neal is by her side.  A fill for the "taking care of somebody" square on my round 4 h/c bingo card.

The title comes from a Jimmy Buffett song, "Wonder Why We Ever Go Home" (strangely enough).  It's about getting older and time racing by, which I think would be on June's mind.  Here's a youtube link, if you've never heard it.


Five Times Neal was Sick (and slept on the Burkes' couch)
An upper respiratory infection after Free Fall, a headache from his time in Avery's vault, exposure to an eye irritant, a broken arm, buckshot to the chest.  Good thing the Burkes have a couch.

Monday
Elizabeth's insistance that Neal lie to Peter to keep his out of Neal's search for Ellen's evidence box has unintended consequences.


Soft Words to Light the Darkness
Neal, Elizabeth, trapped in a storage unit as a result of a raid with an unexpected outcome.  This was originally written for the LAS challenge beginning Fall 2012.

Trust Takes a Tumble
It turned out that fall Neal took while preventing Sophie Covington's kidnapping was a bit more serious than he realized.

Written for the HC Advent 2012

Exigent Circumstances Reconsidered
Peter thought that Neal's plan to catch Curtis Hagen had been brilliant.  Then he reconsidered.

Tag to the Pilot


A Walk in the Park
It started out as a simple walk in the park.  Then a shot was fired.  Maybe.


Second Chances
" Everybody gets one big mistake in life, and one opportunity to fix it. I believe in second chances, Miss Hunter." The opportunity that Adler offered Alex.
Warning:  Aftermath of a sexual assault


Stuck (in the metal with you)
You know those metal grates in some New York sidewalks? The ones over the subway tracks? The ones that are perfectly safe to walk on? Unless somebody did something really, really stupid, and you're wearing a tracking anklet.


I'll be Seeing You
Neal made it through two months of prison after Kate's death, then through a major bank robbery case.  Then comes his first weekend out with nothing to occupy him.


Straight Up
Peter doesn't realize the toll an undercover operation is taking on Neal until June forces him to notice.  Then he has to send his exhausted CI out to seal the deal.  My first attempt at a case fic.


Diana's New Friend
Diana is assigned protection duty.  It's not a good fit.


Be My Host
A felon walks into a thrift store and finds a new confidant and a home.  Title from the song, Be My Host, from the musical "No Strings," starring the wonderful Diahann Carroll.

Tag to the Pilot


Neal and the Copperhead
Neal gets bitten by a snake on his way into work. The day goes downhill from there.

Hello, everyone. My name is Adrienne, Sharon's daughter. Looking over her journal here I see it's been quite some time since she last posted anything as she dealt with her battle against cancer. Sadly she lost that battle on January 20th. I apologize for taking so long to say anything, but it wasn't been an easy couple of months. I do want to thank everyone that was friends with my mom. I teased her a little about things, sure, but it actually made me really happy to see her enjoying and participating in a fandom. Thank you all for making her last few years enjoyable.

Such a glutton for punishment. I've yet to actually finish one of these.

Any thoughts on crucifixion? Thanks!

Neal had spent the last two days finishing the Degas, just as he had done before, right down to ensuring that the aging included immature micro-fractures.  He found it ironic that he was wishing Philip Kramer might get a hold of this one soon.

It had taken two days before the Marshals agreed to deliver Mara Summers to FBI headquarters.

“Hey, buddy! It's Neal Micali. Come on, the party’s just gettin’ started, where’s the fire, my man?” Nikolai walked past him and tried to ignore the irritating, gum-chewing American. 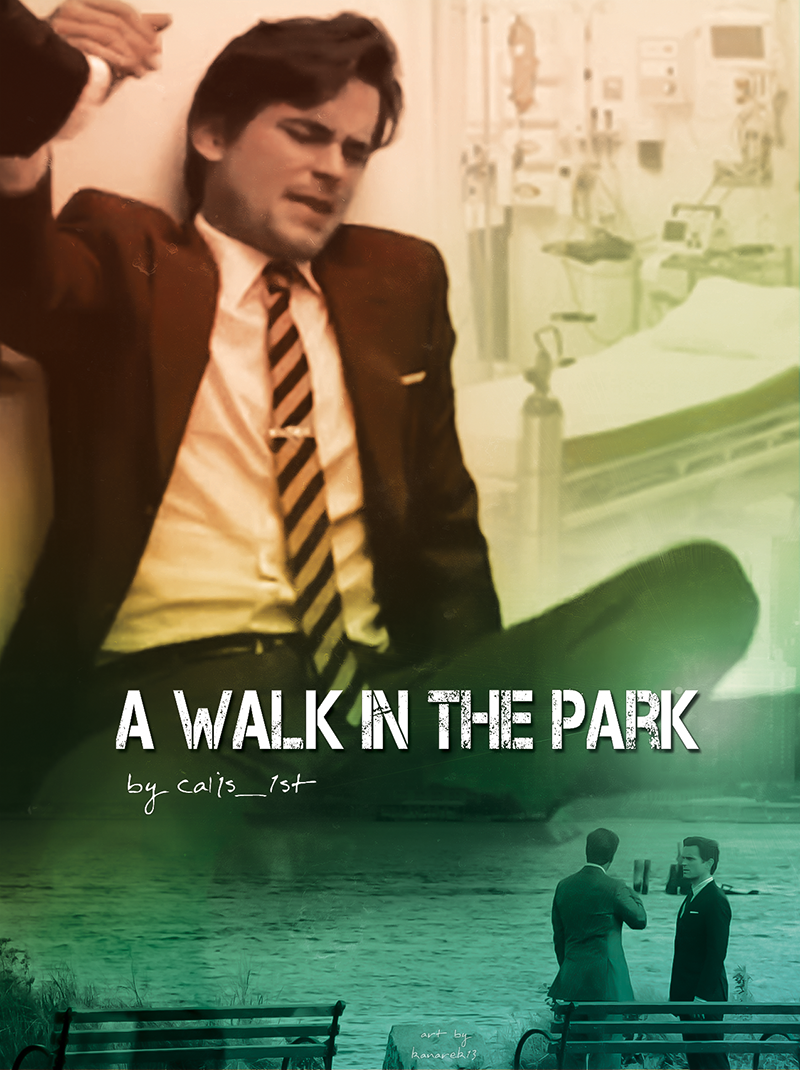 kanarek13 made this lovely Christmas gift to me, as an illustration for A Walk in the Park. Thanks many, many times over!
Collapse